[This is the talk I gave at Boring Conference 2010 in London in December.  It’s about 1500 words, so make yourself comfortable.]

Hi, my name is Lewis Dryburgh and I am in love with the top floor of multi storey car parks, or car park roofs, as I’ll be referring to them throughout my talk.  When I say that I love car park roofs, I don’t mean that I love to park on them.  I’m not going to try and convince you that ‘of all the places you could possibly park a car, the top deck of a multi storey is the best’ although I do believe that.  For me, car park roofs are much more than just vehicle depositaries – they are high rise civic squares, where pedestrians like us are free to park ourselves.  I want you to visit car park roofs on foot, I want you to have responsible fun on them and I want you to love them like I do.

Before I go any further I should point out that I wrote this talk while at home in Aberdeen.  Aberdeen is a city which is lucky enough to have five relatively tall and central multi storey car parks.  I’m not sure if you know this but London is a little bit bigger than Aberdeen – to give you an idea of scale, I’ve only been here for a couple of days and already I’ve seen twelve different McDonalds (Aberdeen only has four), which means that London is at least three times larger than Aberdeen.  Despite my best efforts I’ve not actually seen a multi storey car park, which is worrying.  If you’re a Londoner then I’m sorry, they do exist and they’re brilliant.

The most boring thing about car park roofs is the way we use them.  The top floors lie almost entirely unused during the week, only ever reaching capacity during peak weekend shopping hours, which means that for a considerable amount of time, a large portion of city centre real estate is lying dormant.

Say there are 168 hours in a week, which there are – imagine that city centre car park roofs are full of vehicles between, say, 9am and 6pm on Saturdays and Sundays (which is a generous estimate, but averaged out it accounts for a little extra Christmas shopping traffic and any freak congestion that might occur), that means that car park roofs are only really in use 10.7% of the time.  So there’s 89.3% wastage of these incredible spaces.  Wastage?  Yes, wastage.

I’m sure by now you’re wondering why you’d want to bother visiting a car park roof without a car.  It’s all about atmosphere.  As I’ve explained, they’re not busy – in fact, they’re very not busy.  Just by ascending a few floors you can feel completely alone while still surrounded by hundreds of thousands of people.  They’re quiet too – the traffic below just a distant hum.  There’s nowhere else in a city where you can claim so much personal outdoor space.  Parks obviously come a close second, but they’re full of dog shit and they don’t offer the views which car park roofs do.

The views from car park roofs are wonderful.  If you want a bird’s eye view of a city then there are always going to be more popular vantage points than a multi storey – the usual landmarks and attractions, but I can’t help but find the views from these tourist traps a little unsatisfying.  Too perfect and too polished.  It almost seems like, from a corporate sponsored eagle’s nest, cities try too hard.

There are no tacky gift shops on car park roofs, although if you really want to, you can buy yourself a souvenir ticket.

The view of a city from a car park roof is incredibly intimate, but you really earn that intimacy when you’ve made it there on foot.  In some ways it’s really not dissimilar to a long term relationship.  A somewhat dull climb up the grey concrete staircase, trying your best to ignore the urine, the vomit and any other grim reminders of the realities of life you might come across, and you’re rewarded with a feeling so genuinely touching that you wouldn’t previously have thought yourself capable of experiencing it.

That sounds lovely doesn’t it?  Almost too good to be true – your own little oasis, always close, always available (well, available 89.3% of the time).  Surely there are other non-drivers taking advantage of car park roofs and surely they’re going to get in our way?  Well yes and no.  They are our enemies, but they can be broken down into three categories and defeated.  I’ll tell you how.

Enemy one: ANIMALS. About three years ago I saw a deer in the car park at Matalan.  It was a ground-level car park, so it isn’t exactly relevant to my talk, but what it does illustrate is that animals will always fuck things up, whether it’s your habitat expectations or just your day.  This is especially true in the case of car park roofs.  As a rule, ‘vermin birds’ (pigeons and gulls) are going to be your number one enemy – so when on a car park roof you should always be prepared to get shat on.  Bring some tissues and keep your eyes peeled.  I’ve actually been lucky against this particular foe.  During summer, I started taking my lunch hour on a nearby car park roof.  A few days into this routine, there was a pest control van parked on the normally empty roof.  Attached to the van was a metal perch and sitting on the perch was a large bird of prey, I would later discover it was a hawk.  I watched that hawk tear ‘vermin birds’ out of the sky as I ate my Boots’ Meal Deal and to this day I’ve never been shat on while on a car park roof.  To defeat animals, you will need a more frightening but tamed animal.

Enemy two: SUICIDE. People kill themselves by jumping from car park roofs.  It’s actually quite common, common enough for security precautions such as anti-climb spikes to be installed in most multi storey car parks.  Luckily, if we’re going to be spending more time on car park roofs, then we can intervene.  If you spot a potential suicide while on a car park roof then be sure to ask if they are okay.  If they seem upset then perhaps you could offer them the tissue you’ve packed for wiping up bird-shit.  You can defeat suicide with friendliness.

Enemy three: SECURITY GUARDS. If you’re on a car park roof during the 89.3% window of opportunity, then the chances are you’ll be visited by a security guard on suicide watch.  You will have been spotted on CCTV and a security guard will have been dispatched.  On average you’ll get about 8 minutes of solo roof time before a security guard appears.  They will walk near you, but not talk to you.  You will need to be proactive to show them that you are not unstable.  Strike up a conversation, tell a bad joke.  Whatever you do, do not say “I am not going to commit suicide.” because that’s exactly what someone who was going to commit suicide would say.  You can defeat security guards with small talk.

So now I’ve explained why you should visit car park roofs and how to defeat your enemies, I’m going to finish by explaining what to do once you’ve finished admiring the view.  I’ve compiled a short list of the dos and don’ts of car park roofs.

DO:  Use them like any other public space.  What could you do in a city park or a civic square that you couldn’t replicate on a car park roof?  Nothing.  You can play football, play tennis, have a barbecue, paintball, sunbathe, fly a kite or even ride a bike.  It’s your space.

DON’T: Pay up.  Never be tempted to ‘rent’ a parking space for yourself.  It sets a dangerous precedent with the car park owner and may come back to haunt you when you plan larger events.  It would cost me £148 an hour to rent the top floor of my favourite multi storey car park.

DO:  Sleep over.  The views from a car park roof are even better at night.  If you are camping then be aware that you are probably breaking the law.  Even Scotland, with its more lenient trespass legislation, does not allow overnight lodging on private property.  If you are going to stay the night, then don’t make it obvious, perhaps wear extra layers rather than take a sleeping bag.

DON’T:  Tell anyone.  Obviously you can tell your barbecue guests or a trusted spouse, but don’t go spreading this around.  I am telling you about car park roofs because I want you to enjoy them, but I don’t want you to tell all your friends who then tell all their friends who then tell all their friends to go and hang out on cark park roofs.  This is not the next big thing, this is our little thing.  You may invite two people not in this room to visit a car park roof with you.

DON’T:  Take your pet.  If you take your pet to a car park roof then I will rent a hawk and destroy it.

This concludes my presentation.

[If you’ve made it this far then here’s a reward – 30 seconds of one of my favourite Car Park Roofs.]

I once went up onto a car park roof, and then got frisked, cautioned, and moved along by a rozzer. Apparently some of my fellow citizens used that car park roof as some kind of charming outdoor cocaine market, making my innocent admiration of the views suspicious to the police.

But reading this has given me the inspiration to get back up on those roofs.

Brilliant! Are you real or a character from a Charlie Kaufman film?

Do you really expect me to believe that car park roof is in Aberdeen? With the clear blue sky and the sunshine? Suspicious… 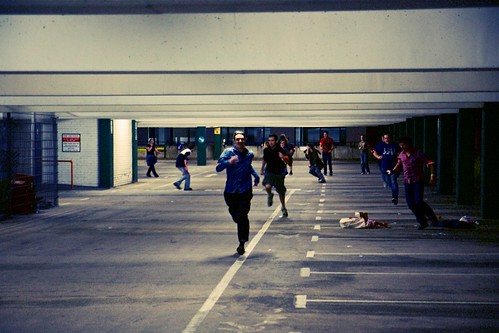